Marginal Contribution to VaR for Simulation

The problem is that the contribution to VaR for an asset depends on the single P&L draw that happens to be the alpha-th P&L observation for the portfolio (the simulated alpha-VaR). The contribution to VaR depends on that single P&L observation in such a way that the sampling variability does not change with the number of trials in the simulation. (I run through a simple example on p 367 that may make this a little more clear. (But the sentence in the middle of the page should read “For Monte Carlo (with correlation rho=0) there will be a 10 percent probability that the marginal contribution estimate is outside the range [0,1], when in fact we know the true contribution is 0.5.”))

BUT there may be a work-around – what we might call the “implied contribution to VaR”.

In a simulation we would pick the length – the number of normally-distributed (X1, X2) pairs to draw. I will consider two cases – length 500 and 2000. “Length 500” means we draw 500 (X1, X2) pairs and for each of these 500 pairs calculate the P&L as the sum of X1 and X2. With these 500 simulated P&Ls we can then calculate the volatility (the standard deviation from the 500 observations), the 5% VaR (the 25th-smallest observation), and the marginal contribution to volatility and VaR using the appropriate formulae. But here we are particularly interested in how these measures (volatility, VaR, marginal contribution to volatility and VaR) randomly vary from one simulation to another. Thus I will run the complete 500-pair simulation multiple times – 10,000 times – and calculate the sample standard deviation of the measures (over the 10,000 repeated simulations).

I am also interested in what happens when the original simulation length increases from 500 pairs to 2000 pairs – when we increase the original simulation length by a factor of 4. We should expect our simulated measures to be less variable – the sample standard deviation of volatility, VaR, etc. should go down by a factor of 2 – the usual root-n behavior of Monte Carlo.

The following shows the results for simulations of length 500 and 2000, and repeating the complete simulations 10,000 times. 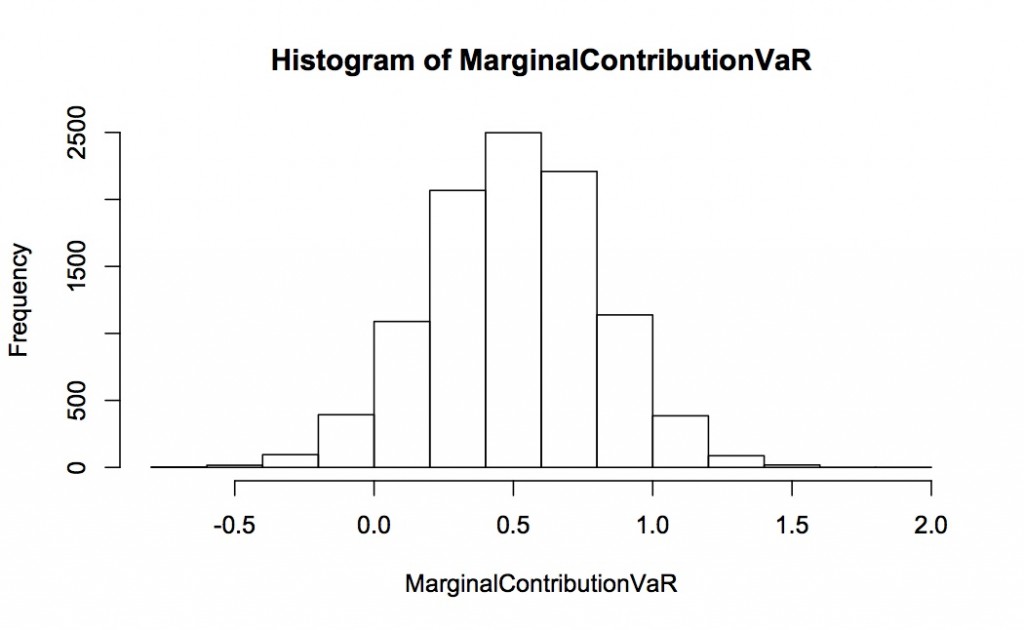 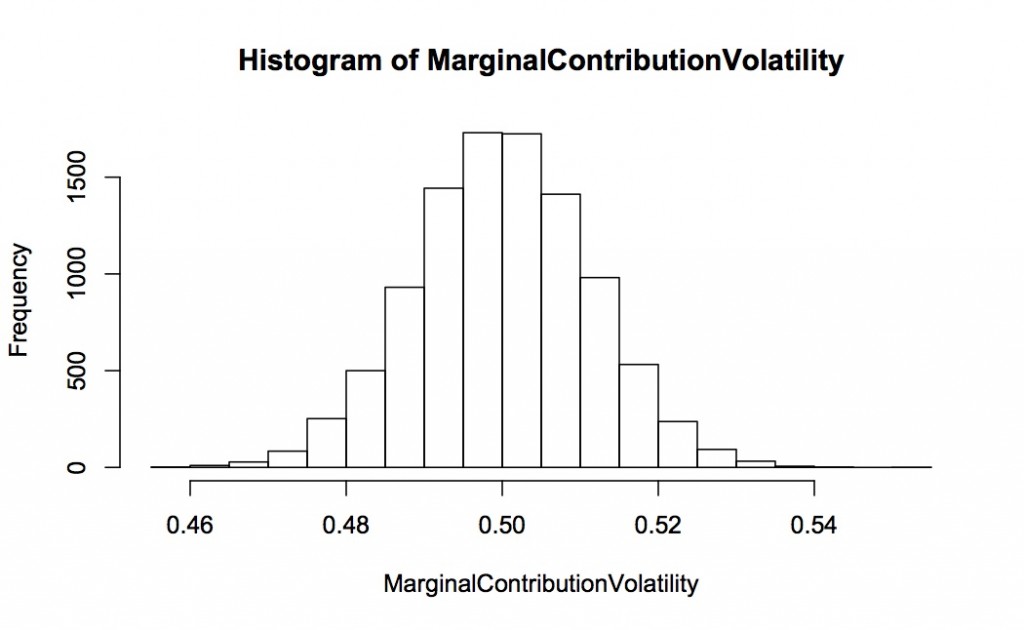 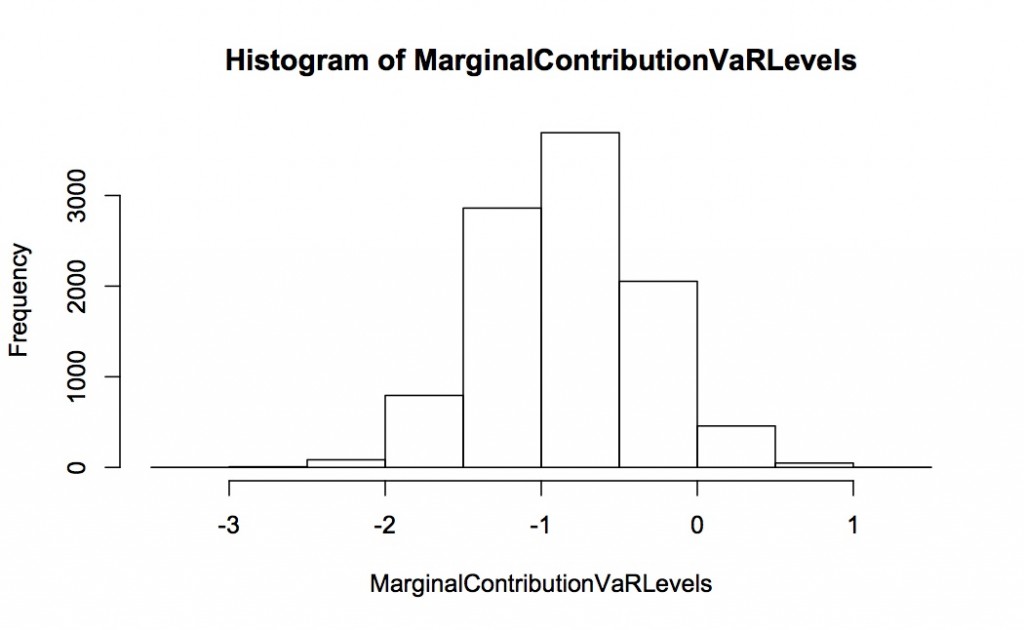 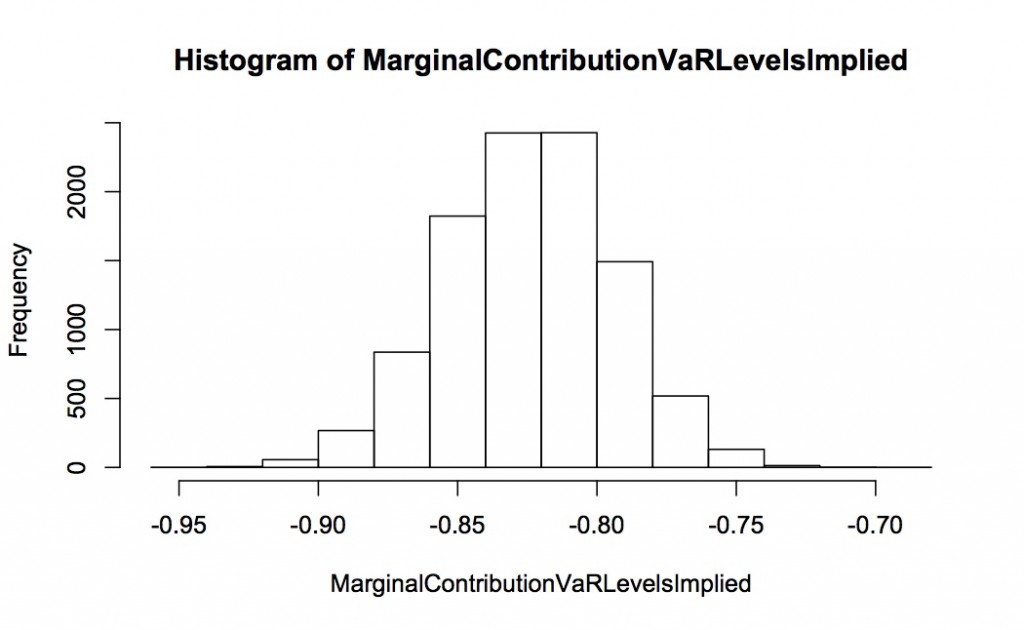 This simulation shows pretty dramatically the problems with estimating contribution to VaR by simulation, and how the idea of “implied contribution to VaR” solves this problem. OK, you might argue that this simulation is only for two assets and is based on normality. But the proportionality between contribution to volatility and VaR holds for a wide class of distributions (elliptical, which includes Student-t, mixture of normals, Cauchy, Laplace, exponential power) so this technique is likely to work more widely.

In the end, however, I generally look at volatility more than VaR. (One big reason is the usefulness of marginal contribution to volatility and its ease of computation.) I could use VaR but when looking at portfolio issues I generally use volatility. Or maybe that’s not quite the way to say it. I think of two related but different sets of questions:

Thomas S. Coleman is Senior Advisor at the Becker Friedman Institute for Research in Economics and Adjunct Professor of Finance at the Booth School of Business at the University of Chicago. Prior to returning to academia, Mr. Coleman worked in the finance industry for more than twenty years with considerable experience in trading, risk management, and quantitative modeling. Mr. Coleman earned a PhD in economics from the University of Chicago and a BA in physics from Harvard College.
View all posts by Thomas Coleman →
This entry was posted in Risk Management and tagged Risk Management, Value at Risk, VaR. Bookmark the permalink.