Rights and Wrongs of Value at Risk (VaR)

With the loss announced by JPMorgan Chase last week there are, once again, loud and varied denunciations of Value at Risk or VaR. Unfortunately, such talk sheds little light upon and often shows misunderstanding of the underlying issues.

Take the statement from the Lex Column of the Financial Times from Monday, May 14th:

Why does VaR seem limited almost to the point of uselessness? One reason is that it does not offer an absolute guarantee that it will do what it says on the tin. It represents the potential losses in a trading portfolio over a given period of time at a given level of confidence. That covers almost all eventualities. The trouble is that problems usually arise in the ones that are not covered.

VaR only promises to give an estimate of the minimum or typical amount we might lose on the worst trading day during, say, a year. It doesn’t represent the worst loss we might suffer. In financial markets, whatever our worst-case scenario, something worse will happen sometime, somewhere. Although some authors talk about VaR as the “statistically worst-case loss,” this is a horribly misleading idea. VaR should be viewed as a periodically occurring event that, while not likely, we should be perfectly comfortable with. We should think of VaR as providing a scale for possible large losses, not a maximum loss or worst-case scenario.

Let’s examine what VaR says it will do “on the tin”. Doing so takes a little bit of work but we will be well-rewarded by better understanding of what VaR can or cannot do.

Financial risk is in some ways so simple, because it is all about money – profit and loss and the variability of P&L. What do we mean by P&L and the variability of P&L? Start with a very simple financial business, betting on the outcome of a coin flip. We make $10 on heads and lose $10 on tails. We could graph the P&L distribution as in panel A of Figure 1. The probability is one-half of losing $10 and one-half of making $10.

In fact, this distribution is what we mean by financial risk – the possibility that we may make money but also may lose money. 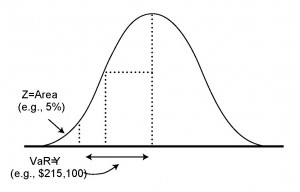 Figure 2 - P&L Distribution for a US Treasury Bond, Showing the VaR

But look at the figure – it is easy to see things could be worse, that there are losses further out to the left. The VaR never tells us the worst that could happen – it only sets the typical bad day (out of 20 days for 5%, out of 250 days for 0.4%). Things can always get worse, so if we see something worse than the VaR that may be the result of simple bad luck.

But we have to learn to live with uncertainty, randomness, luck. The world is full of uncertainty, assumptions, guesses, and estimates. That is life. Yes, we have to make sure our estimates and assumptions are good and reasonable, but we can find no “absolute guarantees” in this world. When the Financial Times says “It [VaR] is based on assumptions, uses historical data …” that cannot be a criticism – it is simply stating the obvious. Anyone who does not like the uncertainty, the assumptions, should probably not be in business.

There is one final and fundamental problem with VaR, an existential problem to which there is no solution. That problem is extreme or tail events, outliers.

There is much more, about VaR, volatility, extreme events, and other quantitative risk issues in my new book, Quantitative Risk Management published by Wiley.

Thomas S. Coleman is Senior Advisor at the Becker Friedman Institute for Research in Economics and Adjunct Professor of Finance at the Booth School of Business at the University of Chicago. Prior to returning to academia, Mr. Coleman worked in the finance industry for more than twenty years with considerable experience in trading, risk management, and quantitative modeling. Mr. Coleman earned a PhD in economics from the University of Chicago and a BA in physics from Harvard College.
View all posts by Thomas Coleman →
This entry was posted in Musings, Risk Management and tagged Value at Risk, VaR. Bookmark the permalink.