I have argued for some time that a robust recovery will occur after households adjust spending downwards. The “savings rate” in the U.S. has risen since the financial crisis, but this reflects changes in taxes, not changes in household behavior.

I believe that households must adjust spending down to reflect levels of lifetime wealth that are lower, after the global financial crises of 2008-2009, than had been expected prior to the crisis. Another way to say the same thing is that households need to adjust their savings upwards to accomplish a long-term deleveraging and readjustment of debt levels

The 2008-2009 recession and the current recovery are all about households de-leveraging and adjusting spending levels downwards relative to income. There are, however, key aspects of the recent past that are often neglected or misunderstood:

Note that any rise in the “savings rate” due to lower taxes is not really an adjustment in household behavior or overall debt profile. Increased government debt will eventually have to be repaid through future higher taxes.

Table 1 shows the current savings rate and spending rates (quarterly) during and subsequent to the recession. A few points to note: 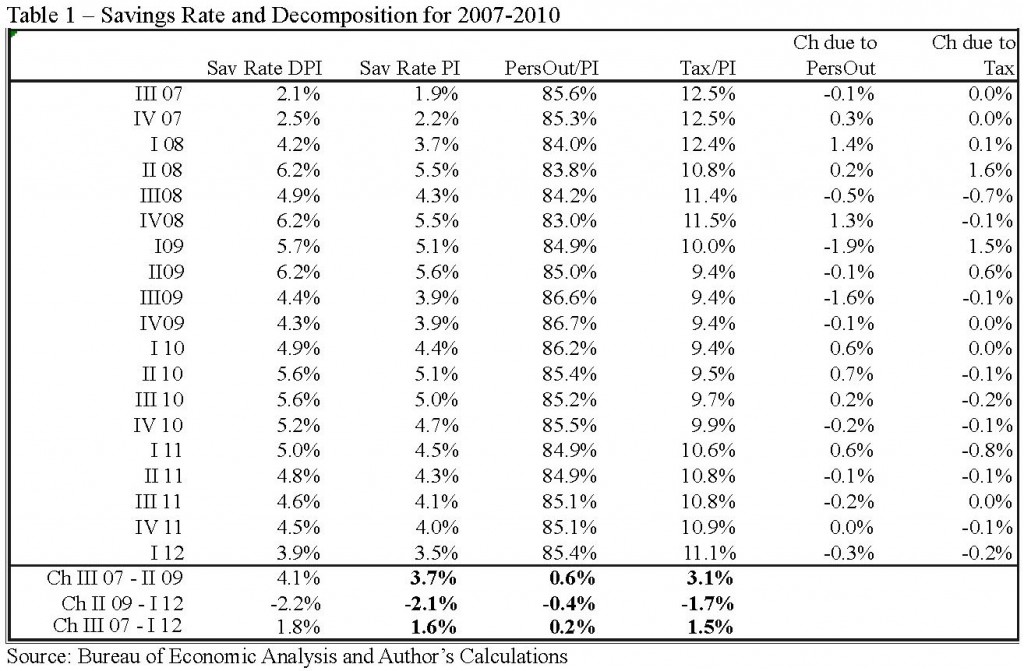 If, as I think may happen, taxes rise modestly and also households do eventually adjust spending down, there will be a recession. This could, however, set the stage for a robust recovery to follow.

Since the bubble burst in 2007-2008 all forms of wealth have fallen – falling housing prices have reduced real estate holdings; stock markets have fallen or stagnated; and, probably most importantly, employment and prospects for future earnings have fallen. The fall in lifetime wealth should naturally induce some adjustment in household spending. The recession was simply that adjustment of spending to new levels of perceived wealth.

Longer-term trends (over the past two decades) are shown in figures 1, 2, and 3:

Household liabilities (measured in the Federal Reserve’s quarterly flow of funds reports) have fallen since 2007, from 135.1% of income in 2007:QIII to 117.5% in 2011:QIV. This is good news and shows households have started de-leveraging. Unfortunately the increase in government debt has been far larger. According to the OECD, central government debt for the US grew by $3.98tn from 2007 to 2010, or from 35.7% of GDP to 61.3%. Future tax liabilities, which are a future liability and thus function as a sort of implicit household debt, have probably offset any decrease in directly-owned household debt. The net result is that household leverage has probably not decreased much, if at all, over the past three years. 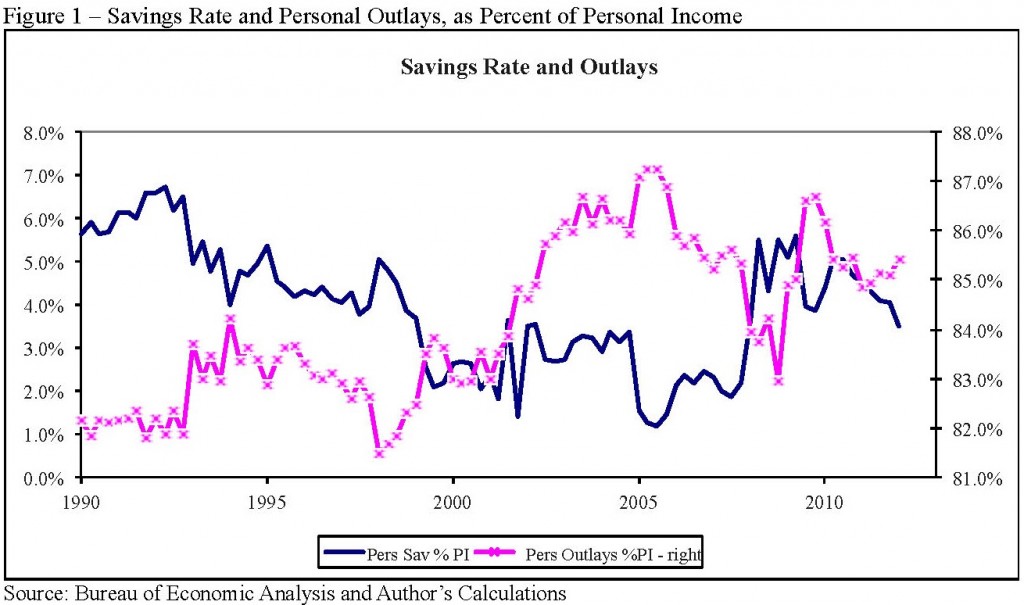 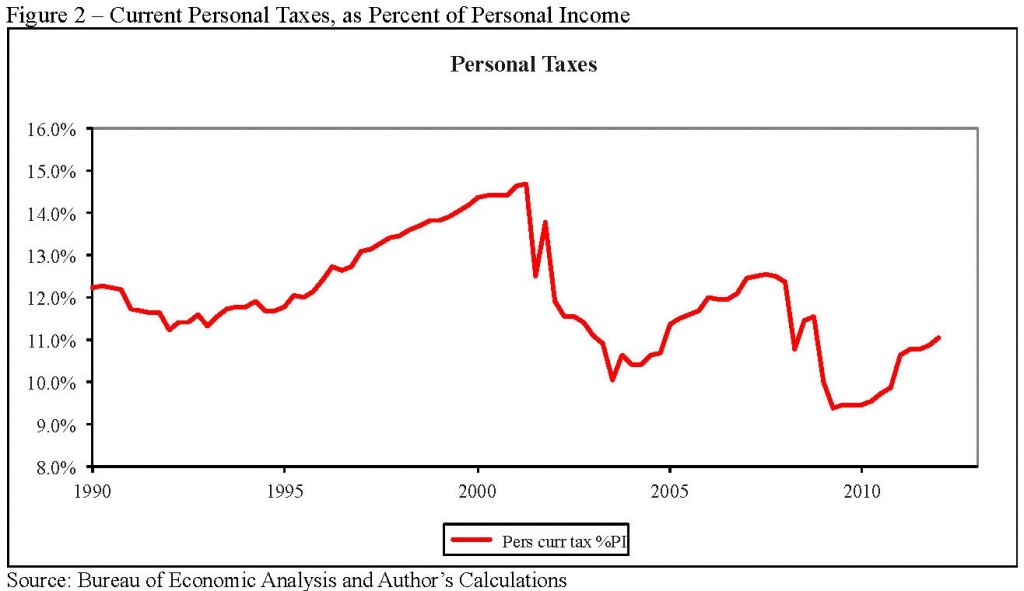 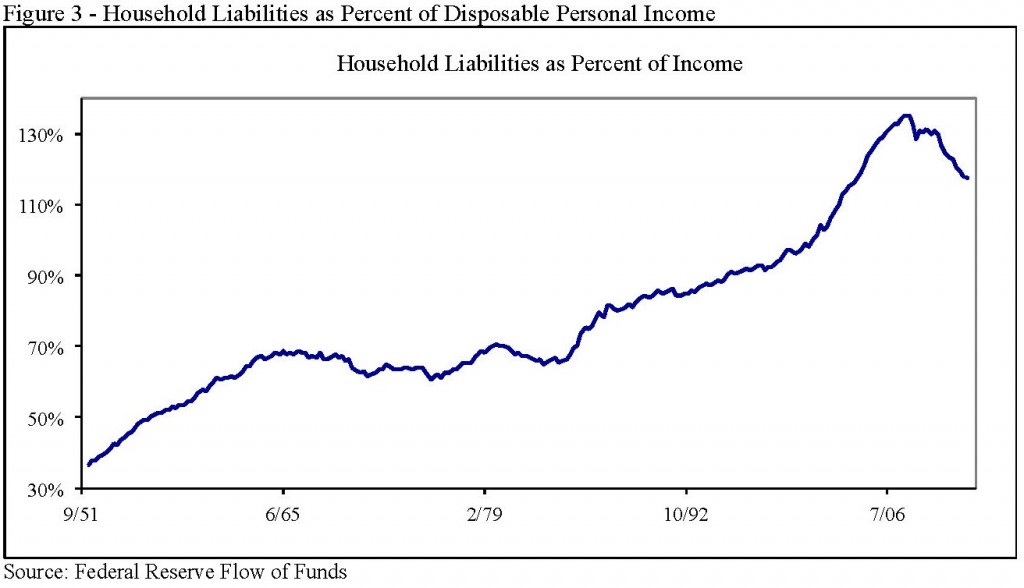 Thomas S. Coleman is Senior Advisor at the Becker Friedman Institute for Research in Economics and Adjunct Professor of Finance at the Booth School of Business at the University of Chicago. Prior to returning to academia, Mr. Coleman worked in the finance industry for more than twenty years with considerable experience in trading, risk management, and quantitative modeling. Mr. Coleman earned a PhD in economics from the University of Chicago and a BA in physics from Harvard College.
View all posts by Thomas Coleman →
This entry was posted in Economics, Musings. Bookmark the permalink.