This is the summary of a 45-page paper (.pdf) available for download at SSRN

Unemployment in the U.S. has risen dramatically since the start of the recession in December 2007, going from about 6.8 million people in May 2007 to over 14.6 million in June 2010. This is often spoken of as “losing 7.8 million jobs,” but this is a terribly misleading view of the issue. The reality is that 5 or 6 million jobs were lost each month, with a comparable (just slightly lower) number found each month. Employment and unemployment are dynamic, and to understand them we need to look at the competing forces, the flows in and out, that shape them. By examining the flows we gain a perspective that is not available if we examine only the levels of employment and unemployment.

The major conclusions are:

Figure 1 shows basic observations about employment and unemployment from the CPS (Current Population or household Survey). The pie represents the average level of employment, unemployment, and not in the labor force (NLF), number of people in millions for January 2008 through Jun 2010. The arrows represent the average of monthly flows.

The first thing to note is the large size of these flows. Consider unemployment. Figure 1 shows there were roughly 4.9 million people each month entering unemployment and roughly 4.7 million leaving, or almost 40% of the number unemployed. Employment is the same story. Flows in and out of employment according to figure 1 were about 6 million per month – even during the worst US recession in over 75 years. Unfortunately, there were more jobs lost than found each month, but this focuses our attention where it should be – what influences the flows in and out and how those flows determine the levels. Finally, the flows to and from not in the labor force (NLF). The size of the flows argue that the distinction between unemployed and NLF is somewhat artificial (many new employees come directly from NLF). We will see below that the economic significance of changes in NLF flows means we must account for NLF behavior to understand changes in employment and unemployment. 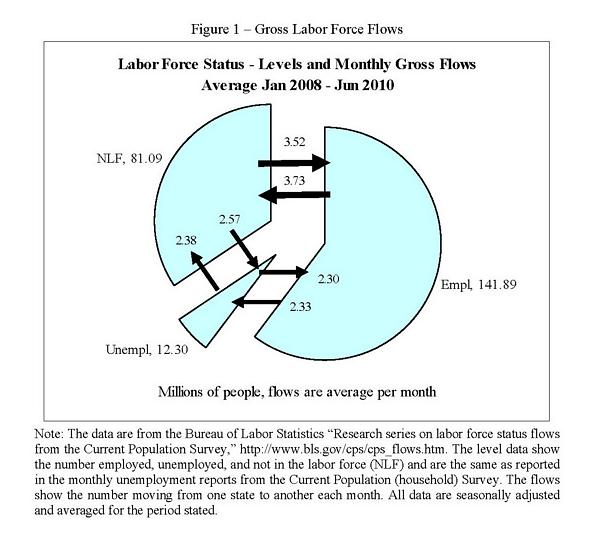 As a mental model of unemployment we often use what I might call the “lump of proletariat” model of changing unemployment. Unemployment is like a bucket full of lumps of proletariat. Each month a lump is either added (unemployment goes up) or removed (unemployment goes down). In reality a better mental picture is the bathtub model – unemployment as a tub of water with an open spigot pouring water in and a pump briskly draining water out. The volume goes up by five gallons not because five gallons are added – it goes up because 115 gallons are added but only 110 are removed. The approach to understanding the bathtub is very different than understanding the bucket of proletariat. With the bucket we focus on the lump or the change in unemployment – how and why did 200,000 people come into unemployment this month? With the bathtub we focus on how many new entrants become unemployed compared with how many leave. We recognize that the tub is fuller by 200,000 people because 4.9 million entered but only 4.7 million left. We focus on why only 4.7 million left and where they went – we focus on the rate of entry and exit as the determinants of the level. 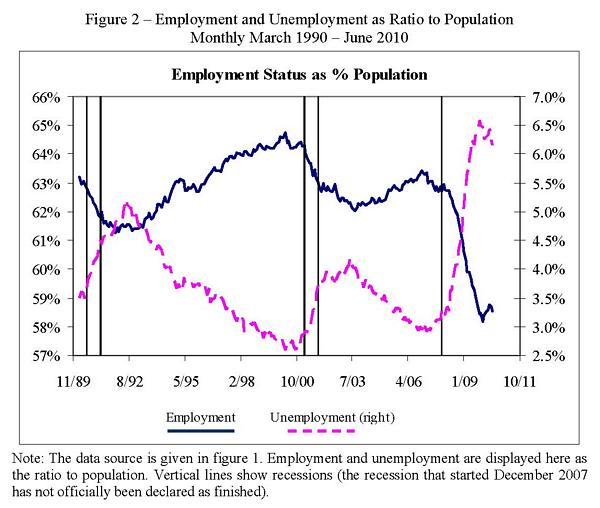 In analyzing the flows we need to look at the conditional flows or probabilities rather than the gross flows themselves. The conditional probabilities are the economically relevant variables. The flows are determined by people making individual decisions and we need to normalize by how many people there are making those decisions.4 From figure 1 we see there are six flows: 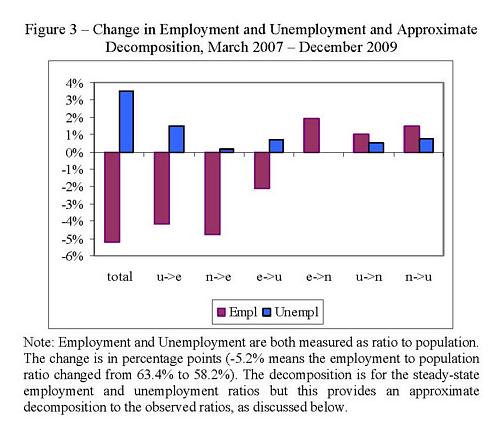 The changes to and from NLF had important effects:

This pattern of changes in flows during the 2007-2009 recession, and their impact on levels of employment and unemployment, matches well with that of the recessions of 1990-1992 and 2000-2003. All three periods exhibited the same pattern of changes in probabilities and the effect of these changes on employment and unemployment levels. What distinguishes the 2007-2010 recession is the magnitude of the changes, not their pattern. (Furthermore, adjusting the flows for possible over-estimation does not change these conclusions substantively.)

Thomas S. Coleman is Senior Advisor at the Becker Friedman Institute for Research in Economics and Adjunct Professor of Finance at the Booth School of Business at the University of Chicago. Prior to returning to academia, Mr. Coleman worked in the finance industry for more than twenty years with considerable experience in trading, risk management, and quantitative modeling. Mr. Coleman earned a PhD in economics from the University of Chicago and a BA in physics from Harvard College.
View all posts by Thomas Coleman →
This entry was posted in Economics, Publications and Papers and tagged Working Paper. Bookmark the permalink.